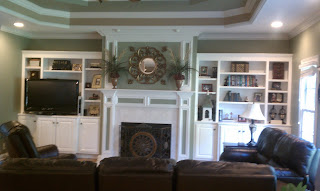 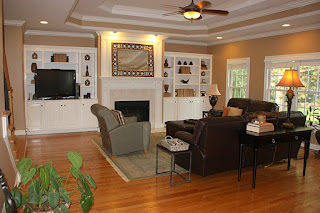 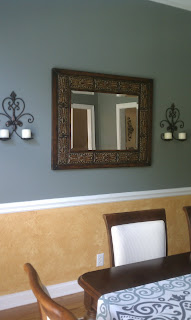 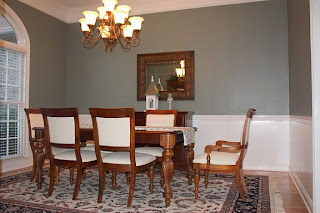 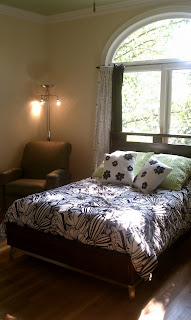 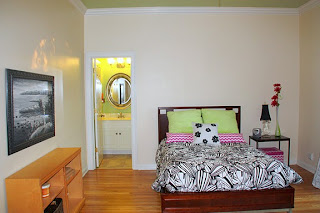 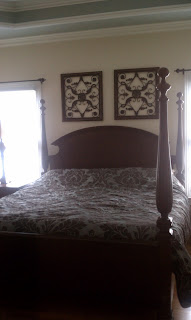 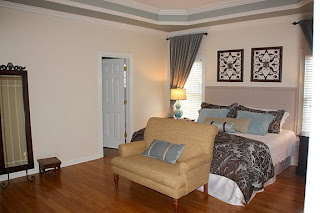 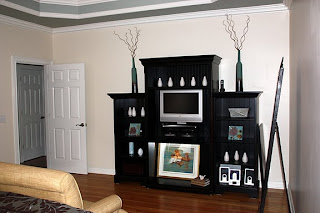 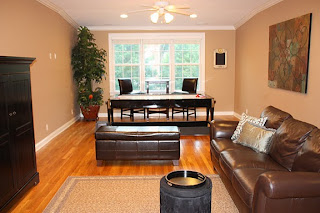 AFTER I didn't get a good before picture of this bonus room but the game table was sitting in the middle of the room with no seating area except the bar table and bar stools, which were originally shoved over in the back corner of the room.  We created a seating area by adding the couch and divided the spaces with the floor rug and bench ottoman.  The bench ottoman was a great choice for this purpose because it is backless and can be used for seating on either side, whether a person seated there is watching television or watching an air hockey game.
This was a fun project because the family is precious and a joy to work with.  They were also willing to try just about anything because they had already purchased another home.  We had to have this entire transformation completed in just a few days because the real estate agent scheduled an open house just days after our initial meeting.   The very best part of this staging is that the house sold two weeks later!  I have already met with the homeowner to discuss design for their new home and look forward to a long relationship with them.
2 comments

Well hello, world!  Let me introduce myself.  I am Kim Biggs and this is my little corner of the web where I'll share things that inspire me.  In the past ten years I have gotten married, suffered through infertility, and been blessed with three babies in fifteen months.  (insert record player screeching sound effect here) That, my friends, changed everything.

I stayed home for the next three years.  And I do mean that I literally stayed home.  Leaving the house with three babies meant that our chances of someone having some sort of an explosion was guaranteed, physically or mentally (and usually both).  So in the months and months that I spent at home with my babies, I used what I have always loved...decor, design and being inspired by beautiful things...to highlight my long days and give myself something to look forward to when the babies went to bed at night.

During that time I discovered design blogs and I can't remember when or how I found the first blog that I stalked, but it belonged to Janell Bealls, Of www.IsabellaandMaxRooms.com and www.HouseofFifty.com  I was so inspired by her idea of framing her kids' art that I couldn't wait until one of my babies could draw a sunshine so I could put it in a frame and showcase it as a masterpiece the way she did.

I love that my first blog post falls on the day Janell's House of Fifty Fall Issue hits the web because I was honored to be asked to contribute an article.  Janell advised me when we remodeled our home a coup,e years ago and encouraged me again and again to pursue my desire to start a business designing and decorating for clients.  My babies all started school and I did start my own decorating business and I love it!

So excited to join the blogging world and I hope you'll come back soon to see what exciting project I am giving my best shot.  Be warned...I sometimes take myself too seriously, I can be a little goofy from time to time, and I can be just a dazzle sarcastic.  But I love to divvy out great deals, show shortcuts I've learned and share the fabulocity that inspires me in my own home and the spaces my clients hire me to make over.

I can't wait to hear from you too so show a girl some love and say hello!
7 comments 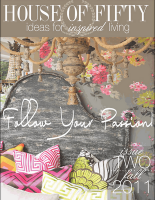